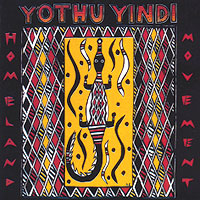 I met you a couple of times Mr Yunupingu.

The first on the unfortunate occassion when you and your fellow Yothu Yindi band members met with myself and NTNews' Ben Langford at a cafe near your home and spoke of your shock departure from the Yothu Yindi Foundation, an organisation that had germinated as an idea, a dream, and grown into an institution over decades. Your anguish was palpable, it was clearly, obviously, understandably a difficult time. I felt it from all of you - and shed a tear on the way back to the newsroom. But the fact you entrusted Ben and I to tell your story kicked me into action as I sat down at my desk.

The second time we met was pure chance - you and your wife Yalmay had emerged from a taxi outside the dialysis unit in Nightcliff. I'd approached the taxi in the hope of flagging it to get to work - the bus was not running on time that day! It was lovely to see you again - that smile still so radiant, overshadowing your frail frame.

I remember your songs as a teenager. I danced to them in my bedroom and heard your call for a treaty. I think I have remained in awe of you ever since. Not only of your music, but your vision and dream to build pride in culture and country, to reach the younger generation through education, and to show people strength and determination.

It's with sadness I now discover you've been incorrectly named in your passing. I sincerely apologise to your family and friends for my tribute tweet this morning. I respect Aboriginal culture and I know the protocols when someone dies. I've known this rule since I was a child and have dilligently stuck by it in my work over the years. But today I made a terrible error of judgement and fell victim to a terrible trend in journalism, where one sees something published and expects it to be checked and permitted for publication - and republishes. Epic error.

I first heard the news of your passing on ABC News Breakfast - you were being named in full. Knowing the dilligence of my former colleagues at the ABC, I presumed that special permission had been granted by the family, as I am aware of rare occassions when permission to publish has been granted. I'm sure there is a story behind this error, because I also know my former colleagues wouldn't willingly break those important cultural rules.

I am sorry Mr Yunupingu. Even in your passing, you have taught me a valuable lesson, one I already knew and practiced, but let erroneously slip on an important occassion.

For the record, I sought out a statement from the family and have posted it below:

At a meeting with the family of Yothu Yindi's lead singer Mr Yunupingu yesterday 4 June at Gunyangara, NT, convened by his older brother Galarrwuy Yunupingu AM and attended by band member Witiyana Marika and the children and grandchildren of the deceased the following was agreed regarding media protocols:

The family has requested that in line with Yolngu cultural protocols that the first names of the deceased are not to be used until further notice.

The family is comfortable with Mr Yunupingu's image being published in various formats including television, video, print, internet (including facebook) and the music of Yothu Yindi being played on radio.

Thank you for your support and respect for Yolngu culture.