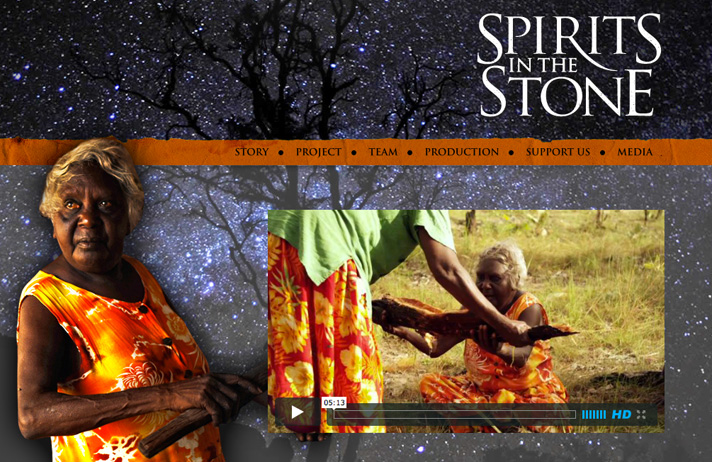 A documentary film being made about a group of Aboriginal elders in Australia’s Northern Territory is being showcased on Oprah’s website, following her visit to the country last December.

The film “Spirits in the Stone” is a story about Margaret Katherine, an Aboriginal elder of the Jawoyn tribe, and the journey of her people's cultural reclamation through the discovery of ancient rock paintings on her traditional land.

The film examines how the world's oldest culture must balance the decision between revealing the 45,000-year old rock art site while protecting the site and the surrounding pristine land that has sheltered the art for thousands of years.

The documentary filmmakers, Australian producer and writer Emma Masters and Canadian producer and director Adrian Buitenhuis, escorted 14 of Oprah’s Ultimate Audience to the site to view its spectacular paintings in Arnhem Land and to meet Margaret and other Jawoyn women.

“When Oprah made the announcement about the visit, the Jawoyn asked us if we could invite her to the site, which is an amazing, colosseum-like rock canopy covered in hundreds of paintings,” Ms Masters said.

“Our friends in Los Angeles, the JWB Gallery, helped us to approach Harpo productions – and they loved the idea.”

“So we worked with the Jawoyn to make it a truly ultimate adventure for the audience group – and to help tell the story of the impressive rock paintings on the Jawoyn’s beautiful, untouched land.”

Harpo producers were so impressed with what they saw in Arnhem Land’s remote stone country, they asked the filmmakers to provide more material about the Jawoyn and their ancient art and offered to feature the film’s trailer.

“I'm thrilled to explore such amazing discoveries and to have the support of Oprah to tell the heroic story of Margaret Katherine, who is forced to deal with issues that Indigenous people everywhere face today,” Mr Buitenhuis said.

“It was great to bring an audience group that were culturally sensitive to the site and to see such a great interaction between them and the traditional owner Margaret Katherine.”

The special feature is being launched on the Oprah’s website – www.oprah.com - today and will be viewable over the next three months.

A special on the Oprah audience’s visit to the Jawoyn rock art shelter, Gabarnmung, will broadcast in Australia tonight.

The broadcast also coincides with the launched of the film’s website – www.spiritsinthestone.com - which also features the trailer.

The film crew will return to Arnhem Land in the middle of the year before moving into post-production.