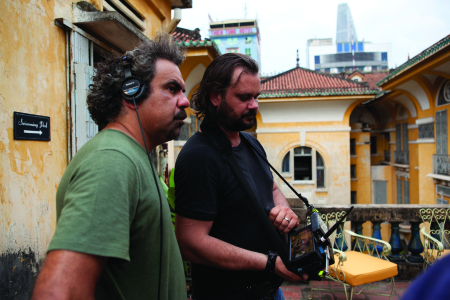 Emma will be attached to award-winning feature film and TV drama director and actor Wayne Blair (pictured on set of the Sapphires with cinematographer Warwick Thornton).

She'll join the director's team when pre-production kicks off in Adelaide in March and will be involved across the entire production.

Emma has already been working with the team on locations and community engagement, and already has a deep understanding of the story, script and the vision.

"From the moment I read the script, I felt this was a special story with a wonderul creative team," Emma said.

"To be able to work on the film so far has been wonderful, but to step up and work as Wayne Blair's director's assistant and be present and working through the entire process from the first day of pre-production is a truly wonderful opportunity.

"I'm sincerely grateful to Wayne, Goalpost Pictures and Kojo Productions for offering me the role, and to Screen Australia for supporting me to develop my craft and get important hands on professional development."

Top End Wedding is a hilarious and heart-warming comedy about successful Sydney lawyer, Lauren, and her fiance Ned. Engaged and in love, they have just 10 days to find Lauren's mother, who has gone AWOL somewhere in the Northern Territory, reunite her parents and pull off their dream Top End Wedding.

The film begins production in April 2018.