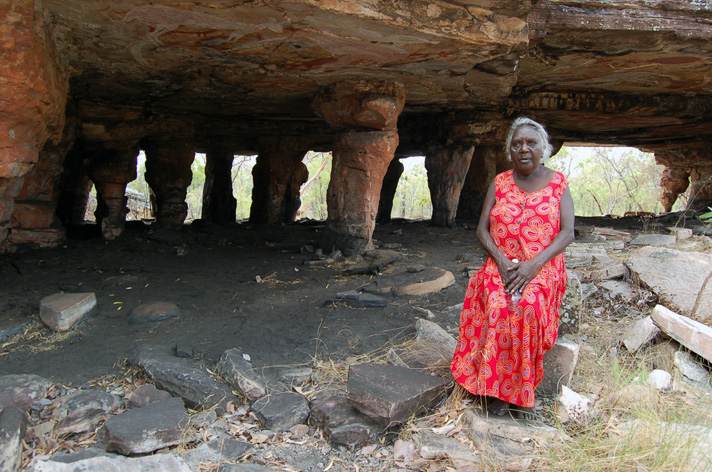 The genesis of Weave Films can be traced back to a time when Emma Masters became indelibly linked to a place once forgotten. It began with a conversation, then a journey into a remote corner of Australia's outback, then a story that spoke.

The rediscovery of a rock shelter covered with hundreds of ancient paintings in Arnhem Land in 2006 was kept quiet for many years. In 2009, Emma Masters, then a journalist with the ABC, was lucky enough to be one of the first Balanda to ever visit the site and to report its redisovery to the world. It came about through a series of fortunate events.

Emma met Jawoyn traditional owner Margaret Katherine while organising for the gracious elder and Queenie Brennan to come onto the Guestroom with Leon Compton on ABC 105.7FM to talk about their lives and stories before the Barunga Festival kicked off that following weekend.

She dedicated a lot of time on the phone with Jawoyn Association workers and people, including Ray Whear and Margaret and Queenie, gathering information about the two elders. During those conversations, it was revealed the Association had uncovered thousands of sites across Jawoyn country, including some incredibly stunning sites that had world heritage qualities. Emma was intrigued and fascinated, after long conversations about the discoveries she was invited to travel to the sites when she next visited Katherine.

A couple of months later as the Jawoyn were preparing to celebrate the 20th anniversary of the handback of Nitmiluk to traditional owners, they invited Emma to cover the story. It was set, the ABC crew were to visit Katherine a week earlier to do the story for 730NT, then Stateline. The story would air on the Friday night before the Saturday celebrations, then the crew would return to Katherine to cover the anniversary ceremony on the banks of Nitmiluk gorge.

It was during that first visit she and the crew were taken by helicopter into the stone country of south-west Arnhem Land. Flying over rocky outcrops covering the entire landscape, they snaked along centipede gorge and landed near Nawala Gabarnmang. Wow. A site that looked very similar to the acropolis with time-worn pillars holding strong a heavy sandstone ceiling.

The crew marvelled at the paintings, their beauty, the sheer number of them and the artefacts dotted around, from stone axes through to grinding stones. They knew they'd been taken to a special place as they stepped back in time to another world. In the shade of the rock they spoke with Margaret about the site and its special significance to her.

They flew onto another site Karboneyeyenan and Margaret blessed the crew's heads with the cool fresh water flowing through the rocky walls and pools. She invited Emma to swim with her, and they had a dip together. Paddling about in the fresh water, in a beautiful place. A magical place, a lovely lady and her special reconnection to her traditional lands.