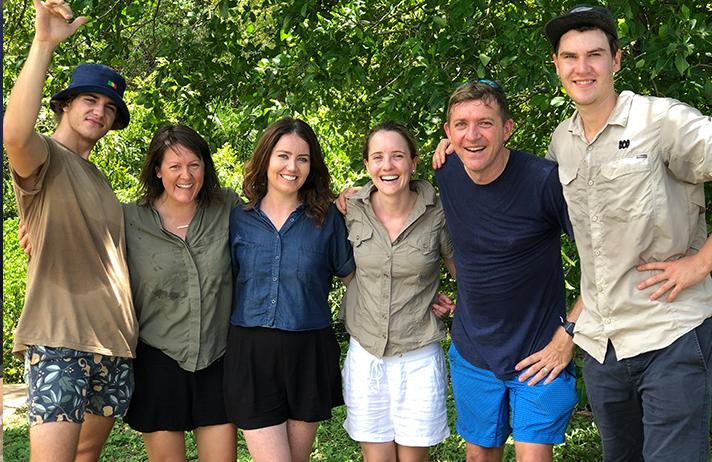 We've finished shooting our final frame for the shoot - and the team couldn't be happier.

Thanks to such an amazing cast and crew - the last few days have been lots of work but so much creative fun as well. We hope you've enjoyed the process as much as we - the co-creators Emma Masters, Lucy McNally and Kristy O'Brien - have.

At this point, it's important to recognise the people who have helped make it happen. News Junkies would not have been possible without the support of a number of important people and organisations.

Gobal Headquarters - for being an amazing crew and for bringing a high level of expertise alongside attitudes that make the work creative, collaborative and fun. We're all on the same page and it's a beautiful thing.

Screen Australia, Nathalie Peter-Contesse and Nerida Moore have been supporting the project since we received our grant under  Gender Matters' Brilliant Stories. Screen Australia gave us further support to make a proof of concept - and we are forever grateful for the opportunity.

Screen writers Vicki Madden, Mark O'Toole and Mke Jones have also been instrumental in guiding the team as we developed our storyworld and characters from scratch. Wthout their guidance, we would never have been able to produce a script we're proud to be able to shoot.

The Australian Broadcasting Corporation and the NT News and their staff in Darwin have been supportive on so many levels, from assisting us with tracking down articles and footage to letting us raid cupboards for archive paraphenalia and giving us space to tell the public about our project - thank you.

The National Trust and the NT Library - for giving us access to some of the Territory's most beloved locations and materials. We could not have achieved our vision without your support and sponsorship.

Georgia Murphy - your style simply rocks and it's been great to involve you in the proces. Thanks for sourcing so many great pieces and making our cast feel special.

Teri Roussos - you came on board late in the game and stepped up to the plate in such a massive way. We could not have done it without you.

Isabella Baldwin - you also joined the team as production kicked in, but your experience on set meant you immediately bacame part of the team. We love your work and appreciate all the help you gave over the course of the shoot.

God - you live up to your name in more ways than one. Not only did you provide amazing transport, but you answered our prayers and deliverd the perfect toad roadkill. Dried, flat, intact.

Rob Smith and Richard Margetson - like true Territorians, your special collections gave our newsroom the tone and style we were looking for.

Glenn Campbell - thanks for bearing yourself all in the name of art.

Michael Franchi - for joining us on set and taking some amazing pics.

Owain Stia-James - you've been part of the team since the beginning and words cannot express our appreciation.

To the broader Darwin community - all the friends and people who have helped along the way and given advice and expertise to get the production to where it is now.

We now move into post-production ... and can't wait to show you the end product.

Stay tuned for a premiere and online release in late January. More details to come.